I am trying to be good this week and follow a low carb diet as I have a wedding this weekend and a very fitted dress!

Sunday before I started back on low carbs I had tacos for dinner (sorry) and I had some leftover meat in the fridge. So for a handy quick meal I decided to throw the taco mince into halved peppers. Any vegetarians out there can replace the mince with quorn.

The mince was fried and a few different seasonings were added  (cajun, barbeque, garlic, beef stock). If I had of planned this dish when I was doing the grocery shopping I would have bought a better pack of peppers. The ones I bought were quite small and funny shapes. I cut them in half and filled them with the mince, a little bit of salsa and some grated cheese.

I put them in the oven at 180c for about 20mins, obviously this depends on your oven. Once the pepper is soft and the mince is fully heated they are good to eat. I had cooked the mince the previous night so it was cold going into the oven.

They were really good and will definitely make it again!

This weeks Tuesday fitness update is a bit different, I haven’t anything overly different exercise wise over the past week.  I am still keeping up with the walking most nights.

I have decided this week to share one of the low carbohydrate menus that I love, it hasn’t really got a name Chicken Pepperoni 🙂 . It is such an easy recipe: 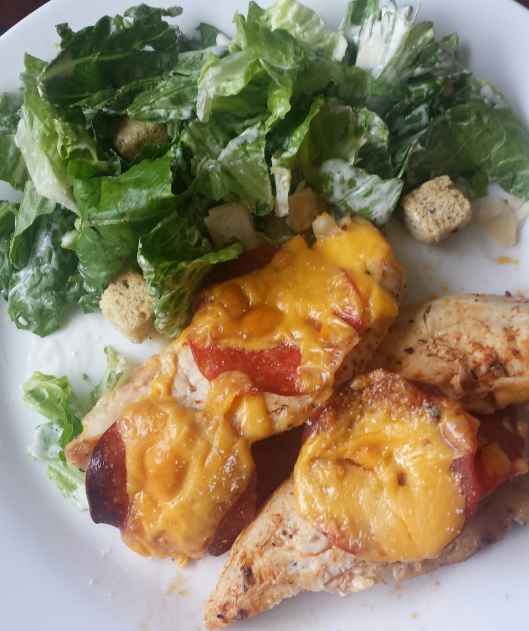 I chopped a chicken fillet into strips and covered with a mixture of Paprika, Cajun spice, Garlic and Parsley.  I tend to just throw a few bits from bottles that are in the press, anything that I like really.  I put the chicken in the oven until the chicken is about 5 minutes from ready (obviously this depends on the amount of chicken you are cooking and your oven).I then put the pepperoni on top of the chicken and then put it back in for another 5 minutes.  After this I topped it with the low calorie cheese and then put it back in the oven until the cheese was melted.

I made up a quick caeser salad and had this with the chicken.  It is a pretty nice dish and really tasty!